When Parker Dam was completed in 1938 and Lake Havasu began to fill, it not only provided water for California’s west coast cities, it also created Arizona’s “west coast” beaches. Birds flocked to the new habitat and Havasu National Wildlife Refuge was created in 1941 all up and down the eastern shore of the lake. Despite the remote location, a couple from Needles saw the recreational potential and purchased land for a fishing retreat on Pittsburgh Point, a peninsula jutting out from the Arizona shore into the lake’s widest part. Using its wartime license, the Army Air Corps also came to the peninsula in 1943 and bulldozed an emergency landing field big enough for Flying Fortresses. The two gravel runways and 1,030-acres were designated Kingman Emergency Field S6, or “Site Six,” an auxiliary installation for Kingman Army Air Field and the Yucca Aerial Gunnery Range south of Kingman.

The military also recognized the recreational potential. In 1944, it built a rest and recreation facility for airmen on leave. When the war ended, the entire facility was declared surplus and Vic and Corinne Spratt moved from Needles to manage Site Six as a fishing resort. But their attorney had to prove to the military prior ownership of the land. Fortunately, war surplus aircraft were cheap in the 1950s, so guests could fly into what was now called Havasu Airpark, with former army barracks turned into living quarters, grocery, restaurant and bar. There were no roads into the entire area in Arizona except rough jeep trails, but access to the California side had already brought powerboat racing to the lake.

Pittsburg Point seen from the air in the mid-1960s, looking NE toward the Arizona shore that is developing into a new city, and the Mohave Mountains (used to be called the Chemehuevi Mts.). Site Six facilities are in the foreground, with the trailer park and motel recently added. The two angled runways, one now paved, remain from the WWII emergency field. A shorter third runway of dirt, crossing the paved strip, had been added in the 1950s. Bob Petley of Phoenix took the aerial photograph and published it as a postcard.

One day in 1958, Robert McCulloch suddenly flew in and purchased Site Six on the spot. Before the war, he had worked in the aircraft industry. Now he was a wealthy owner of an oil company in Los Angeles that encouraged use of its gas and oil by also manufacturing chain saws and outboard boat motors. He told the Spratts and other landowners that he needed a test facility for McCullough outboards. But when he talked about plans for a fabulous city on Lake Havasu, with private airplanes in every garage and world-class resorts on every beach a lot of people thought he was crazy. Even his business partner, C. V. Wood, Jr., who designed fantastic recreational landscapes at Disneyland thought the idea of an economically sustainable city in the remote desert was naïve, perhaps even risky.

Site Six resort, photographed by Max Mahan about 1965, shows two Lockheed Constellation airliners parked at the terminal. McCulloch added recreational facilities beginning in 1963. In center, right to left, are the circular Lake Havasu Travel Trailer Park, a boat launch ramp, two-story Lake Havasu Motel and parking lot and a cove leading to the McCulloch test facility. The airport was later abandoned, replaced with a strip on the north side of town.

Wood master-planned a city built around recreation and retirement living with chain saw and boat factories for high-paying jobs. McCulloch started networking to acquire 16,000 more acres of land owned by the federal government. Several complicated land deals eventually transferred ownership or provided leased land on which to build a city. In 1963, for a little over $73 an acre, McCulloch purchased 13,000 acres given by the federal government to the State of Arizona. In 1964, Arizona native and Secretary of the Interior Stewart Udall issued a Lower Colorado River Land Use Plan that recommended expansion of Site Six for recreational use as a Bureau of Sport Fisheries and Wildlife concession, after “withdrawal from Wildlife Refuge classification” and transfer to Arizona State Parks Board management. McCulloch Properties, Inc. was created as developer and concessionaire. The following year, the Parks Board entered into a 50-year lease with the federal government for more than 13,000 acres along Lake Havasu’s Arizona shore to create the largest state park. Mohave County even designated the whole area an official Irrigation and Drainage District to facilitate development. In 1986, the US Department of Interior gave Pittsburg Point land to Arizona in exchange for state land taken for the Central Arizona Project canal. Lake Havasu State Park was divided into two units following the land exchange.

In 1964, two Lockheed L-049 Constellations began free flights for prospective buyers who would spend two days touring the town site. Flights left numerous cities like Cleveland, Chicago, Seattle, Los Angeles and Dallas. From 1963-1978 a total of more than 2,700 flights brought 137,000 prospective buyers to Lake Havasu City. Lockheed L-188 turboprop Electra airliners replaced the Connies in April 1968. By then, the Nautical Inn resort had opened on Pittsburg Point, along with a state beach and marina. The growing town would soon have two golf courses, together with stores, schools and public buildings on the mainland opposite the peninsula.

Two Lake Havasu City airliners are parked on the ramp about 1965 with the control tower and terminal at right. McCulloch purchased a total of five Lockheed L-049 Constellations between 1964 and 1966 so that at least two could be flying at any given time. The aircraft had been built 1945-1947 and previously used by the US Air Force, Air France, KLM and TWA. One of the planes, N90831 built for military service in 1945, ended up at Pima Air Museum in Tucson, and has been restored to its former TWA livery.

Lake Havasu City still needed some centerpiece that would attract the attention of the whole world. Robert McCulloch hit on an idea when he noticed the city of London England put its namesake bridge up for sale in 1967 because it was sinking into the Thames due to the excessive weight of modern traffic. He and Wood arrived in London in April 1968 with $2.46 million and the deal was an instant sensation. “London Bridge falls to the Apaches,” said the London Daily Express. “Arizona Says ‘We’ve Got It,’” shouted the Evening Standard. By a marvel of modern engineering the bridge that had spanned the Thames since 1830 would be dismantled stone by stone, transported by ship to California and then trucked to the Arizona desert. The Lord Mayor of London helped McCulloch and Wood lay the first stone September 23, 1968 and thousands attended Grand Opening Day, October 10, 1971.

Actually, only the handsome facing stones made the trip to Arizona, still a 10,000-ton load. The rough-cut stone and rubble fill was left in England. Crews built a precisely sized reinforced concrete bridge on dry land where the peninsula narrows. When the facing stones arrived each numbered stone was returned to its place, attached to hangers on the concrete core and cemented in place with bentonite. After the concrete core was completely covered, it looked just like the bridge from London, all five graceful arches wearing a 130-year-old patina of grime. Then, an artificial channel was dredged under the new bridge, making Pittsburgh Point into an island. This view, looking NW, shows the recently completed bridge, English Village and channel with the beginnings of landscaping.

By 1970, the city of more than 4,000 enjoyed a new paved highway connecting it with Interstate-40 to the north and Parker on the south. The Outboard World Championship race with a $60,000 purse was held off shore that year, along with the National Water Ski Speed Championships and the London Bridge Regatta featuring 200 yachts. Hollywood star Charlton Heston won the Celebrity Tennis Tournament held at Lake Havasu City in March 1970. And Lake Havasu State Park drew more visitors than any other that year. 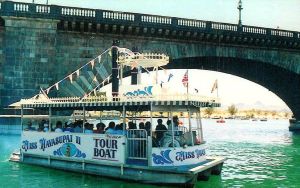 Tourists leave the English Village on the Miss Havasupai II for a 45-minute ride, probably in the 1980s. They could make a similar trip on the Dixie Belle, patterned after a Mississippi riverboat. The lake was named after the Havasupai tribe, which has a small reservation in Havasu Canyon tributary to the Grand Canyon. There is probably no connection to the boat, but the tribe selects a Miss Havasupai and Little Miss Havasupai at an annual beauty pageant.

Through the 1980s and 90s “Arizona’s Playground” city continued to grow, almost 16,000 residents in 1980 and more than 24,000 by 1990. It passed Kingman and rivaled Bullhead City to become the largest community in Mohave County. College students began coming in increasing numbers to Lake Havasu to party. On a holiday weekend, traffic jams of boats might clog the bridge channel or a popular cove. But as the searing desert sun bleached the old stones of London Bridge, some of the luster faded from the older resorts. Still, a room could cost $100-$300 a night. There would be a $1,000 fine for “illegal camping,” and only one free boat launch ramp. How far removed from the days when Site Six was largely enjoyed by those few families with a private airplane. Recently, employment in the hospitality industry has declined, while jobs have been added to businesses serving the permanent community. Many residents just love the dry heat and access to the lake. Robert McCulloch knew they would. The population has now passed 54,000.

This entry was posted in Lake Havasu City, tourism. Bookmark the permalink.